Cycling CHB (Formerly the CHB BATs Cycling Club) is a family-friendly club who have had several National and Olympic cyclists who are proud to call CHB home. We are located in the beautiful Central Hawke's Bay and run a Tuesday evening cycle race from 6:00pm till dark during daylight savings in the summer.

We cater for all abilities from beginners through to senior riders. Our races are graded for ability with distances to match and offer a varied program, from hill climbs to Kermises to Time Trials -
check out where our next club race will be held.

Our members are passionate cyclists and often arrange group rides during the week and weekends. Please check out our FACEBOOK page for detail about upcoming group rides.

All visitors are welcome! No need to pre-register, just come along to a Tuesday Night race. Alternatively you can contact one of our committee members or send us a message here.

a history of the club 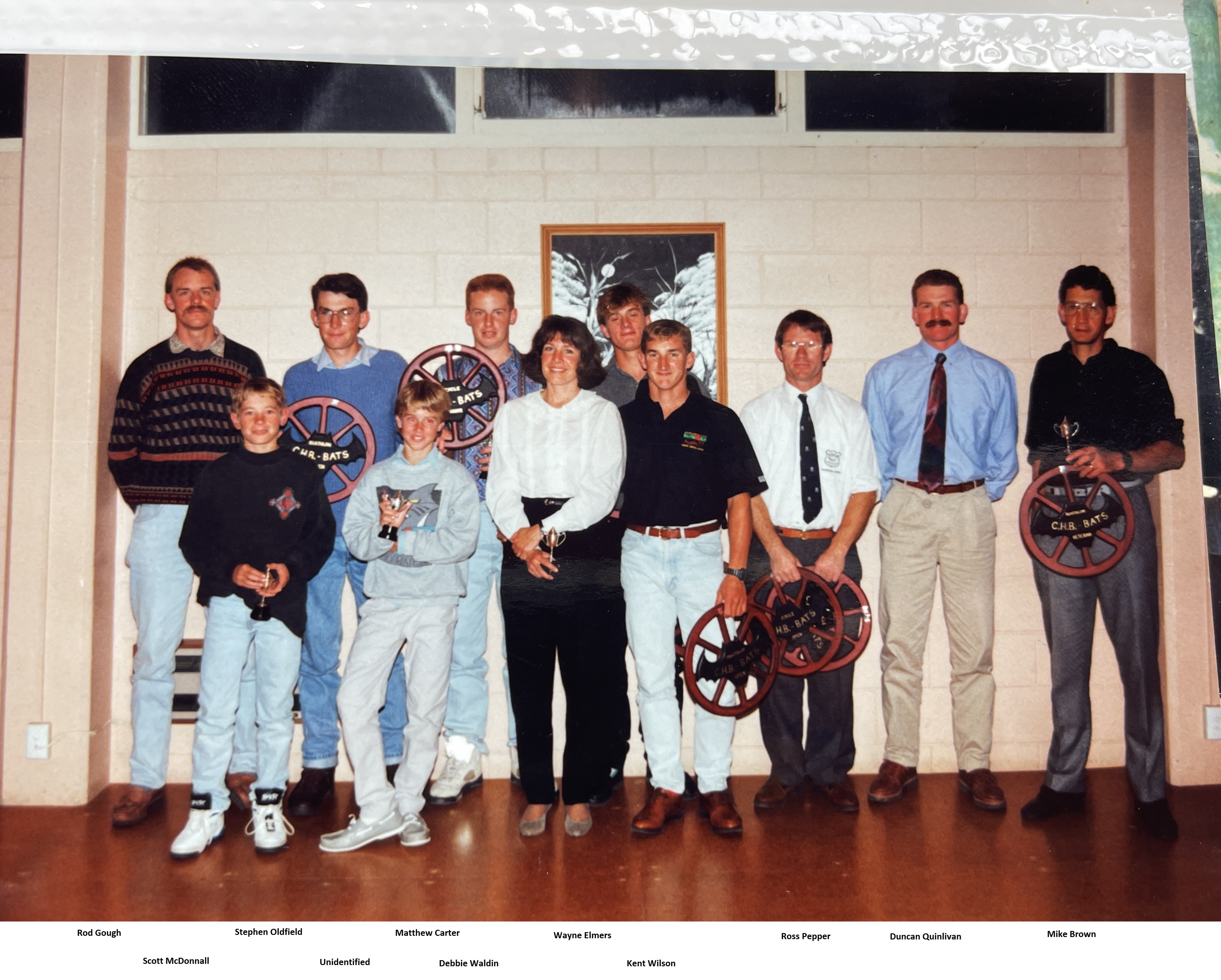 Whilst out on a training run friends Mike Brown and Robbie Hislop discussed the idea of forming a new club which encompassed cycling as well as running.

With this in mind Mike Brown organised a Biathlon from the Waipawa School, which consisted of a 2km run followed by a 6km cycle.
Five competitors turned up on the 26th Of January 1989 for this event. When looking for a name for this new club Suzanne Carpenter who was married to the local dentist came up with the acronym BATS and hence the name of the club was called CHB BATS, which stood for Biathlons and Triathlons club.

After a few years a group of people approached the club and enquired if people who only wanted to cycle could have their own cycle race. In 1991 a cycle race was added to the programme monthly. Gradually the cycle races increased in popularity and in 1993 cycle races were held in conjunction with the biathlons. The cycle races proved so popular that the biathlons and triathlons were shifted to a different night so that competitors could compete in both events. The weekly biathlons and triathlons slowly dwindled out but the club still runs a Duathlon club champs as well as the Mike Brown Memorial Duathlon which is a tribute to the founder Mike Brown who was tragically killed in a tramping accident in 1997.

The first CHB Tour race was held in 1993 and was run separately to the club by Ross Pepper, Richard Lee and Max Chatfield. This has now become the popular Tour De Beautiful, which is held annually in January, and now run by the club. It attracts fields upwards of 500 competitors.

In 2008 the club changed its name to Cycling CHB but recognised its history by keeping the Bats emblem, which it actively promotes as the logo of the club.

Club racing is held on a Tuesday night from various venues in CHB. Upward of 100 competitors turn up for these weekly events with competitors of all abilities catered for with a number of different distances.

The club has had a number of notable riders amongst its ranks. Jeremy Yates who won the Junior World Road Race in 2000. Current member Westley Gough who won a gold medal at the Junior World Cycling Championships in 2005 and a bronze medal at the Olympic games in Beijing in 2008 representing New Zealand in the Track Teams Pursuit. He is the only person to have won the Central Hawke’s Bay Sportsperson of the year on two occasions.

1. An approved safety helmet must be worn at all times.

2. Obey all the road rules – especially keeping left. Crossing the centerline at the finish will result in DQ.

3. No aero bars to be used in bunch races.

4. Riders may take no part in any grades race other than their own. The only time this rule does not apply is when the race is a handicap race.

5. Club members are required to help with marshaling duties once a season, reporting for duty by 5.30pm on the Tuesday night they are rostered on. If you can’t make it before 5.30pm, you must organise someone else in your place.
Check the roster at the bottom of this page

6. No points can be earned on a club night unless subs have been paid in the required time frame (2 weeks from the first race). Read more about our club fees over on the JOIN PAGE.

7. Every rider must display their rider number during Tuesday night racing. Your cloth number may be pinned to the left rear side of your cycle shirt or you can use the bike number attached to your seat post. In the absence of either of these, a number will be applied in marker pen to your left leg.

8. Junior riders will be required to use age appropriate restricted gearing in line with UCI recommendations. This change will be phased in over the beginning of the 2014/2015 season and assistance will be given to help Junior riders become compliant.

1. The rider may not move up or down grades 4 races out from the end of each season.  So 4 races leading to the Italian pursuit and 4 races leading to the last ride of the season, the Hatuma dash.
‍
2. As stated above regarding moving up grades 4 rides from the end.  If a rider is building up for an event, such as Age Group Nationals, and is wanting to further challenge themselves, we will let rule 1 slide.
‍
3. Riders must see Elizabeth Dawson or John Lowe prior to making a grade change so we can make it less stressful for the timing and registration teams.  We want to avoid grade changes on the day.
Please email Elizabeth Dawson (lizzydawson475@gmail.com) or John Lowe (bglowe2014@xtra.co.nz) at least 2 days prior to race day, or see Elizabeth or John the week before so the changes can be considered.  Once the change has been made, riders will have to stay in that grade for at least 3 races.
EXCEPTIONAL CIRCUMSTANCES WILL BE CONSIDERED BY THE HANDICAPPERS.
‍
4. If the rider changes up a grade and becomes the leader of that grade, they do not automatically get the leader's jersey; the original grade leader will retain the jersey.

5. When a rider wins up to 3 times in a row, they will gain automatic promotion up a grade.  This of course does not include A grade.
F grade will always have leeway; changes will be made if required.

6. If a rider rides in the wrong grade without informing the handicappers they will not receive points for that race.

An important announcement from Cycling CHB regarding future cycling in the club under the current NZ Traffic Light System
New Covid Traffic Light System
All Cycling CHB events will fall under the New Zealand Government's new traffic light system, classed as "events (indoor / outdoor)
Hawkes Bay apart from Wairoa are in an "Orange" status initially - this means we are unable to operate without a vaccine certificate requirement.
By requiring  vaccine certificates from all participants, we are able to continue to run our race schedule under "Green" or "Orange" status with no limit on numbers and "Red" with the limit of 100 participants
Please be advised that to participate in any Cycling CHB event from Friday December 3rd until advised otherwise you will need to provide the club with your "My Vaccine Pass". You can do this by

All participants, spectators and staff must accept responsibility for their own health and wellbeing.

If people are attending any Cycling CHB race (includingvolunteers and supporters) they must scan in via the NZ Covid Tracer app.

All people attending events must maintain a reasonable distance from others (2 metres if in a cue), must avoid coughing, sneezing or spitting in close proximity to any other people.

Registration staff will wear masks.
Registrations will be held outdoors in areas where there is sufficient space for people to be widely spaced.

POST-RACE
Riders must not congregate in large groups. Please remain in grades, apart fgrades for post race discussions. If you have any questions or concerns, please contact JohnMudgway on 021 515 466 of contact the Club at cyclingchb@gmail.com